This window was dedicated on Sunday, February 9th, 1930 by Rt. Rev. Philip Cook, Bishop of the Episcopal Church in Delaware. The window was a gift which was provided in the will of United States Senator, Willard Saulsbury in memory of his sister, Margaret Saulsbury, both of whom were communicants of St. Paul’s Church. A new reredos was included in the memorial and the reconstruction of the sanctuary of the church was also made.

The window was designed by artist James H. Hogan and constructed in the studios of James Powell and Sons of London, England. Mr. Hogan called this window the “Te Deum’ window, meaning “a hymn of praise to God.” Mr. Hogan also designed the windows of the great Liverpool Cathedral.

The window is seven feet wide and eleven feet high with five lancets or openings separated by massive stone framework. Above these is a large circular opening and two smaller ones. The middle lancet depicts the incarnation and is itself divinded into three parts. At the bottom is shown the Blessed Virgin Mary holding the infant Jesus in her lap with His arms outstretched: above this is the Crucifixion of the Lord, again with His outstretched on the Cross; above this is the scene of the Resurrection of our Lord with one hand extended and the other raised in Blessing.

In the large circle directly above we find the sacred climax – our Blessed Lord sitting glorified upon His throne surrounded by the seven golden candlesticks mentioned in the Book of Revelation. His right hand is raised in Blessing and His left hand and arm embrace the sceptre significant of His regal authority.

In the other two smaller circles together with the topmost features of the other four lancets and two smaller openings above these, are shown Cherubim and Seraphim, who “continually do cry, ‘Holy, holy, holy, Lord God of Sabaoth.'”

The smaller openings depict “the Heavens and all the powers therein”…the sun, moon, and stars, comet and Jupiter, with her moons which join the Cherubim and Seraphim in recognition of the everpowering Glory of Christ.

In addition to the angels at the top of the four other lancets are shown. “The Glorious Company of the Apostles.” “The Goodly Fellowship of the Prophets.” “The Noble Army of Martyrs.” “The Holy Church Throughout All the World.” In the attitude of praising and acknowledging Him.

Along with Bishop Philip Cook, the Rev. Samuel VanLoan, former rector of St. Paul’s, under whom the entire installation, planning and supervision and final touches were made, and the Rev. Martin J. Bram, the present priest in charge at the time, were also present at the dedication.is 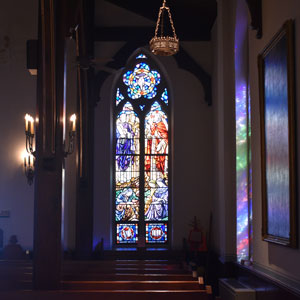 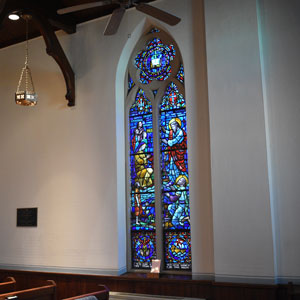 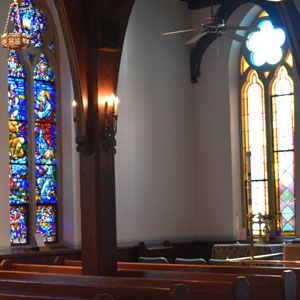 Thy Will Be Done (left)

This window may portray the Angel Gabriel at the Annunciation.

The Angel Gabirel appeared to Mary, bearing the news that she was chosen by God to bear his only Son.

“And Mary said, Behold the handmaid of the Lord; be it unto me according to thy word.”

This is one of the two oldest memorial windows in the church. It was crafted in the Tiffany style.

This window was given in memory of Miss Isabel Moore’s mother, IIelena Benson Moore.
Miss Isabel is buried in the churchyard. Her aunt, Miss Nellie Moore, played the organ at St. Paul’s for 25 years.

This Window Depicts the Resurrection of Christ.

This window illustrates the resurrection of Christ as told in Mark’s gospel. Mary Magdalene, Mary the Mother of James, and Salome, the mother of the sons of Zebedee, are shown approaching the tomb with jars of spices to anoint Christ’s body.

They discover that the stone has been rolled away, and are greeted by an angel who announces to them that
Christ has risen.